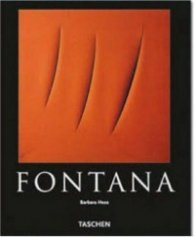 Italian artist Lucio Fontana tore apart the modern art establishment—literally. Trained initially as a sculptor, Fontana (1899-1968) blurred the lines between painting and sculpture by creating works that combined both form and color in a spatial context, most famously exemplified by his slashed canvases of the 1950s and 60s. Fontana`s work was truly conceptual, in that the ideas he wanted to express were more important than the actual work itself; with titles like Concetto Spaziale (Spatial Concept) and Scultura Spaziale (Spatial Sculpture), his pieces served as visual explanations of his ideas. From his early work in collaborating with architects through his years in Buenos Aires (where, in the mid-1940s, he published the famous "White Manifesto" and "Technical Manifesto of Spatialism," among others), his experimental light installations of the early 1950s, and his later experiments with various media, this book covers the entire career of Italy`s pioneering abstract artist.

About the Series:
Every book in TASCHEN"s Basic Art Series features:

* a detailed chronological summary of the artist"s life and work, covering the cultural and historical importance of the artist
* approximately 100 color illustrations with explanatory captions
* a concise biography

About the author:
Barbara Hess (b. 1964) is an art historian, critic and translator, resident in Cologne. Her numerous articles on contemporary art have featured in Camera Austria, Flash Art, Kunst-Bulletin and Texte zur Kunst. She co-curated the touring exhibition Ready to Shoot: Fernsehgalerie Gerry Schum/videogalerie schum at the Kunsthalle Du"sseldorf and the Muse"e d’Art Moderne de la Ville de Paris. Her TASCHEN titles include a monograph on Willem de Kooning.